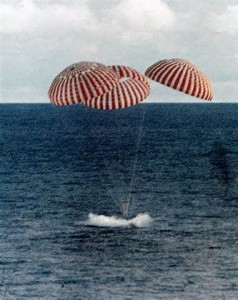 I remember April 17, 1970 very well. I was a senior in high school and looking forward to the future; I was still lamenting that fact that on April 10th Paul McCartney announced the breakup of the Beatles. It was also the day that Apollo 13 returned safely to earth.

Apollo 13 was the third Apollo mission intended to land on the Moon, but a mid-mission oxygen tank rupture severely damaged the spacecraft and forced the lunar landing to be aborted. Despite great hardship caused by limited power, loss of cabin heat, shortage of potable water, and the critical need to get the carbon dioxide removal system going, the crew returned safely. The mission has been called a “successful failure.”

Howard’s movie misquotes the radio transmission made by Jack Swigert, Apollo 13’s courageous pilot. In the movie, the character is quoted as saying, “Houston we have a problem.” In reality, what was actually said was, “Houston, we’ve had a problem.”

Most are familiar with Ron Howard’s exhilarating movie version of the events produced in 1995. James A. Lovell, the astronaut who commanded the famous mission, is quoted as saying that the movie’s version of events was pretty accurate. However, Howard’s movie misquotes the radio transmission made by Jack Swigert, Apollo 13’s courageous pilot. In the movie, the character is quoted as saying, “Houston we have a problem.” In reality, what was actually said was, “Houston, we’ve had a problem.”

The distinction between these two tenses is extremely important and shows the intense training and renowned character of the astronauts. The two tenses can be the difference of engaging in something, or carrying on. “Had” implies that the problem had passed, and that coming up with a solution is the current reality. The astronauts made a choice to focus on the solution, not the problem. The oxygen tank severly ruptured, no point on dwelling on it, it was time to come up with a solution – creatively, quickly and calmly.

Focusing on the problem will only distort your mentality and rev up anxious thought. It’s all about choices, and in this case, the choice was to focus on the solution, not the problem. Ekhart Tolle, author of A New Earth and The Power of Now states that, “For a problem to exist, you need time and repetitive mind activity. If danger arises in the present moment, there may be emotion. There may even be pain. But that’s a challenge, not a problem.”

The organization simply reacts to the pressures of its environment. When an organization reaches this reactive stage, it is left only with three options. First, it can continue in its reactive mode and eventually cease to exist. Second, it can be acquired (or conquered). Or, third it can attempt a massive restructuring of the status quo.

The astronauts of Apollo 13 had to terminate an existing abort plan and new protocols were invented. Considerable ingenuity and acumen under extreme pressure was necessary for the safe return.

In business, it’s important to recognize challenges and not make them into problems. It is also important not to fall into the rut of reactive thinking and try to maintain creativity when finding solutions. Our minds are our instruments, our tools. In our everyday tasks, we use our minds for specific undertakings, and when they are done, the task is over. However, Tolle points out that “about 80 to 90 percent of most people’s thinking is not only repetitive and useless, but because of its dysfunctional and often negative nature, much of it is also harmful.” If we can grasp this thinking and the thinking and actions that the astronauts on Apollo 13 demonstrated, then we will be better able at solving problems in business and our everyday lives.

Today April 17th marks the 45th anniversary of the return home of Apollo 13’s astronauts and their remarkable decision making and strategic leadership. What will you take away from their lessons? How will their “successful failure” impact your everyday decision making?